The following problem occurs on an HP Proliant ML350 server running Windows Server 2016: The server randomly and without an obvious reason crashes with a blue screen that reports the following error: 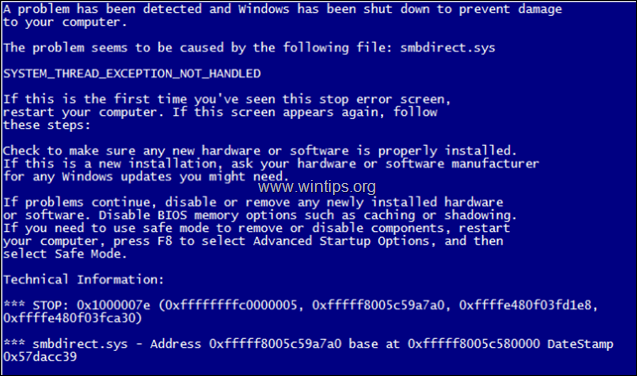 So, if you 're running on this case, proceed and install the latest driver for the network adapter according the installed Windows Server version: *

* Notes:
1. HP also recommends to install also the latest version of HPE Intel Online Firmware Upgrade Utility for Windows Server x64 Editions version 5.1.3.0
2. If after installing the network driver, the BSOD problem persists, then check the original article on HPE Support Center for updates or continue reading below and apply the next solution.

After investigating the BSOD error 0x1000007e (0x7E) with the BlueScreenView utility, I found that the crash is caused by the SMB Network Direct Driver (smsdirect.sys).

So, the next method, to resolve the BSOD error 0x1000007e, is to disable the SMB Direct feature. To do that:

1. Open PowerShell and give the following command:

2. After disabling the SMB Direct, the 0x1000007e bsod problem should be resolved.

* Note: If you want to re-enable the SMB Direct in the future, give the following command in powershell:

That's it! Let me know if this guide has helped you by leaving your comment about your experience. Please like and share this guide to help others.