This tutorial contains instructions to resolve the following problem in Server 2016: "Windows Defender Feature Installation Failed. Source files could not be found".

After removing the Windows Defender feature and the payload, on a Windows Server 2016, by using the "Dism /online /Disable-Feature /FeatureName:Windows-Defender /Remove /NoRestart /quiet" command, it's impossible to install the Windows Defender feature again. The problem remains even if you define an offline image, as an alternate source path, either in 'Add Roles and Features' wizard or in the DISM command: "DISM /Online /Enable-Feature /FeatureName:Windows-Defender /Source:X:\Sources\Install.wim".

1. Place the Windows Server 2016 installation Media on the server. *

2. Create the following two (2) folders on the root of C: drive:

3. Launch Command Prompt as Administrator and give the following command, to list all the Windows Server 2016 versions that included in the 'install.wim' file.: *

* Note: Where X = the drive letter of the Windows Server 2016 install media or the mounted ISO file. e.g. if the install media is on drive H: type:

4. Find out the Index number of the installed Server 2016 edition.*

* e.g.: If you have installed the "Windows Server 2016 Standard with the Desktop Experience", then the index number is 2.

5. Then give the command below to extract the corresponding to your Windows Server 2016 version "install.wim" file (Index number): *

* Note: Replace at the above command the drive letter and the IndexNumber according to your case.

e.g. For this example we want to extract the install.wim file with Index number=2 (Windows Server 2016 Standard) to the root of the "C:\" drive (C:\install.wim). So, the command will be:

6. When the extraction is completed, proceed and remove the 'Read Only' attribute from the extracted 'install.wim' file, by giving this command:

7. Now, mount the extracted install.wim image to "C:\mountdir" folder, with this DISM command:

8. give the following command to see the installed Server version.

9. According to the installed version, navigate to Microsoft Update Catalog and download the corresponding cumulative update for your Server 2016 version/build* and then place the update into the "C:\MSU" folder. 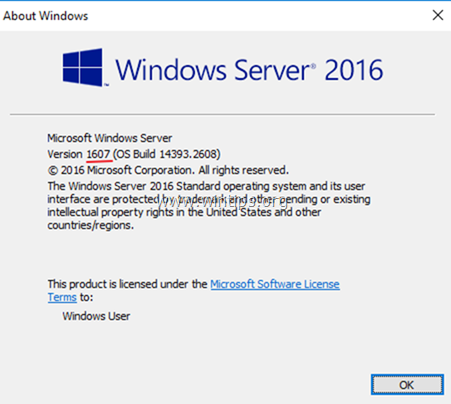 10. When the download is complete, proceed and update the mounted offline Windows image (at "C:\mountdir" folder) with the downloaded update (from "C:\MSU" folder), by giving this command:

* Note: In the above command change the "Update-Name" with the name of the downloaded update. For example: if you have downloaded the KB4103720 update, the command will be:

11. When the operation is completed, open Task Manager and close the Explorer.exe task. (this is important otherwise you 'll receive the error "the directory could not be completely unmounted" at the next step).

12. Give the following command to commit the changes back to the offline "C:\install.wim" image and to unmount it. *

13. When the changes are committed back, open Task Manager again and from the File menu, choose Run New Task, type explorer.exe and hit OK.

14. Finally, give the following command to install the Windows Defender feature in Server 2016:

15. Close all windows and restart your server to apply changes.

We're looking for part-time or full-time technical writers to join our team! It's about a remote position that qualified tech writers from anywhere in the world can apply. Click here for more details.

How to Reset File Associations in Windows 10/11.

FIX: Explorer Does Not Refresh Changes in Windows 10/11.

How to Disable 'Use Windows Hello with your account' prompt (Error 0x801c044f).